You call -that- swanky?

The New York Jets have a new training facility. It was a massive $75 million dollar investment, and for some reason, the press is raving about it. But some of us are less than impressed. My color colleague Kelly from Arte Styling wrote an impassioned letter to the editor of Fast Company Magazine in response to an article they published about the Jets' new digs.

"Although the project is no doubt 'architecturally sound', and takes into consideration some important functional needs, there is one important component that the architects/designers and the sports organization neglected to address - color. I am absolutely dismayed by the complete disregard of the importance of color in the design. There is an overabundance of white, which makes the facility feel cold, sterile and empty. Is this really the message that the organization wants to send to their players, employees and the general public? The facility looks more like a psychiatric hospital than a place to foster teamwork, vitality, and strength." 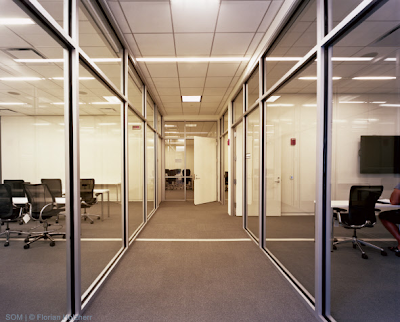 image source
I completely agree. To me, this building looks like any other commercial/industrial complex, embracing blandness. 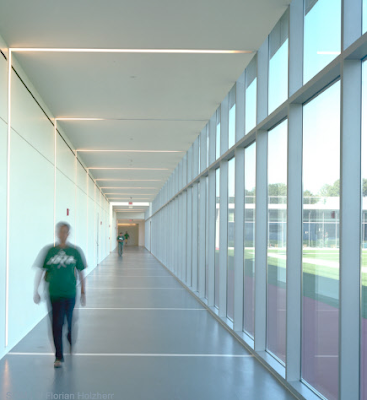 image source
According to the press release released by the architecture firm for this project, SOM, this is the "newest, largest and most ambitious and holistic training facility in the National Football League." Holistic? Ambitious? Maybe in regards to other aspects. But they totally dropped the ball when it came to color. 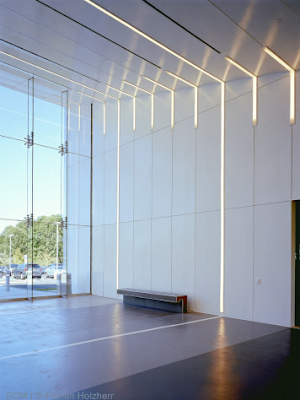 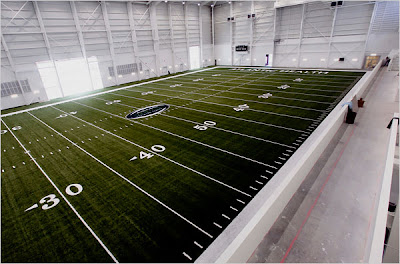 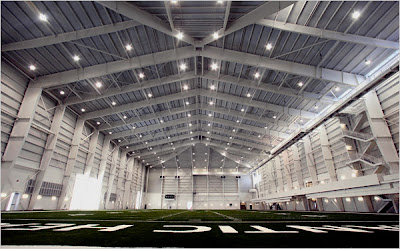 image source
I'd like to know if other colors were considered for this massive indoor field space. I would think that if designers were trying to simulate a true outdoor environment, they would have thought beyond the natural turf field to the walls and ceilings surrounding them. What about a nice sky blue? The thought of spending any amount of time in a huge white box with harsh fluorescent lighting is anything but inspiring. 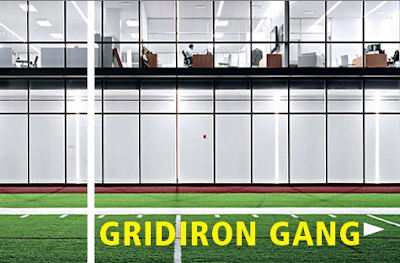 image source
From the field, you can see into the executives offices behind a wall of glass windows. Nothing but white, as far as the eye can see. "The architect’s vision was to create a focused learning and working environment that would enable the Jets to train at a higher level, with more efficiency and effectiveness and with total focus on football," according to SOM.

How is it possible that with all the research and effort that was channeled into this project, no-one bothered to examine how color effects work productivity? It blows my mind.