Madonna as a Role Model

"I was surprised by how people reacted to "Like a Virgin" because when I did that song, to me, I was singing about how something made me feel a certain way – brand-new and fresh – and everyone interpreted it as I don't want to be a virgin anymore. Fuck my brains out! That's not what I sang at all. 'Like a Virgin' was always absolutely ambiguous."
—Madonna on the backlash for "Like a Virgin"
The official "Like A Virgin" music video
The backlash from parents after Madonna's infamous Like A Virgin Performance was a surprised to her but, when looking at the ways she took the female gender and gave it so much empowerment to feel free to express sexuality in front of millions is not something that most parents in the 1980's would have been thrilled about. Madonna is reclaiming what it means to be a woman by taking this idea of virginity and making it fluid. In a society that puts such an emphasis on female purity, Madonna is exclaiming that she knows what is like to feel like a virgin and not feel like a virgin and that she will remind you of that while she is in a little white wedding dress rolling around on the floor. Madonna is empowering women and young girls in a way that is different from most of the feminist before her. She isn't encouraging woman to get jobs or fight for equal rights but to embrace themselves as the person they are. This proved to be horrifying to parents across the nation who saw her a sex crazy wild woman. 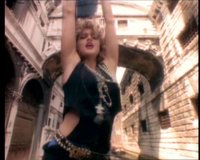 Family values advocates would not for a second listen to Madonna say that "Like a Virgin" is not a raunchy sex song and immediately targeted her as a reason for the decline in "American values." This accusation only helped to fuel the fire that is Madonna and gave younger generations more exposure to a woman that was working to free their gender role. Madonna has play a significant impact in changing America' view on the female gender. Although it is still widely oppressed, there is far more room for woman to empower themselves whether it be through music or sexuality. This is why Madonna has acted as a role model for America, she has given women a voice that goes beyond politics but allows woman to embrace themselves as part of the human race.
Questions:
-Through out American pop culture artists are criticized for being "bad role models," what is it about people like Elvis, Madonna, Britney Spears, etc. that creates such a fear in American families?
-Is it the role of artists like Madonna to be a role model for teenage generations in America and who decides what that should look like?
Sources:
Rooksby, Rikky (2004). The Complete Guide to the Music of Madonna.Omnibus Press.
Clerk, Carol (2002). Madonnastyle. Omnibus Press.
Newer Post Older Post Home