The Controversy over Pink

The text in a recent J Crew ad reads: "Lucky for me, I ended up with a boy whose favorite color is pink. Toenail painting is way more fun in neon." 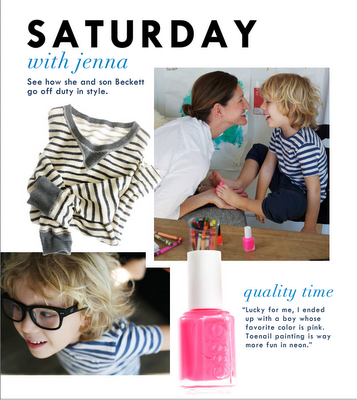 image source
In response to the uproar surrounding the ad in which Jenna Lyons, creative director, paints her son's toenails pink, I thought I'd revisit the topic of gender specific colors.

Personally, I think it's Ridiculous with a capital "R" how bent out of shape some people are getting. Did it ever occur to them that color-coding for boys and girls is all just a marketing ploy, set up by advertisers, to sell more product? Just look through history. There is no innately Male or Female colors. It's all a matter of interpretation. Talk to someone in India, the UK, or heck, even Berkeley California, and they'll tell you that colors don't define a person's sexual identity. 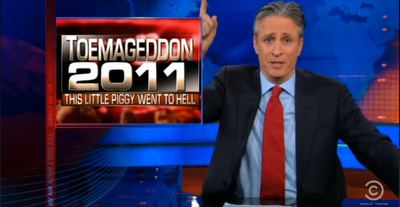 image source
I love what Jon Stewart has to say on the matter: "in a Fox News clip Keith Ablow is seen saying the ad is "an attack on masculinity," Stewart counters with, "If only masculinity had a defender. Someone like four-time Ultimate Fighting Champion Chuck Liddell," who paints his toenails black." 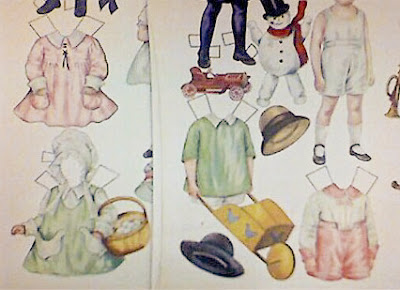 image source
Photograph of paper dolls from "Polly Pratt's Sister and Brother," Good Housekeeping, 1920, by Jo Paoletti, courtesy of the Strong National Museum of Play, Rochester, N.Y. Yup, that would be a pink romper for the boy. 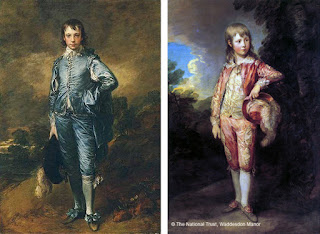 image source
As I entertained in detail in my article, "Why is Blue for Boys and Pink for Girls?" (four years old and still my most read-post) the assignment of pink for girls and blue for boys was not always the case. Often times, blue was thought to be much more of a feminine color, and pink a watered-down masculine hue.

There are many reasons that contributed to the pigeon-holing of gender-specific colors, specifically in the United States. According to an excellent article on slate.com, marketing played a major role in pushing color-coding. The book, Pink and Blue: Telling the Boys From the Girls in America, by Jo B. Paoletti is referenced. In the money-flush era between World Wars, mothers started buying more manufactured clothes instead of sewing their own. In order to boost sales, marketers established color-coded clothing. No more hand-me-downs from big sister to little brother. Nope, all new outfits would have to be purchased. Thus ensued a battle for whose coding would win out. Some department stores, like Wanamaker's in Philly, Marshall Field in Chicago, and Maison Blanche in New Orleans, pushed pink for girls. Others, like Macy's and Franklin Simon in New York City, and Bullock's in Los Angeles, pushed pink for boys. This was in 1927. Post war-time saw all sorts of bright cheerful colors introduced back into the marketplace, least of which was pink for women.(source)


Can we say market-speak?

Think pink! think pink! when you shop for summer clothes
Think pink! think pink! if you want that quel-que chose
Red is dead, blue is through,
Green's obscene, brown's taboo
And there is not the slightest excuse
for plum or puce or chartreuse
Think pink! forget that Dior says black and rust
Think pink! who cares if the new look has no bust
Now I wouldn't presume to tell a woman
what a woman oughtta think
But tell her if she's gotta think: think pink!
Pink for bags! pink for shoes!
Razzle, dazzle and spread the news!
And pink's for the lady with joie de vive!
Pinks for all the family
Try pink shampoo
Pink toothpaste too
Play in pink, all day in pink,
Pretty gayin pink
Drive in pink, come alive in pink
Have a dive in pink
Go out dancing but just remember one thing:
You can get a little wink
If you got a little pink
In your swing
Think pink! think pink, it's the latest word, you know
Think pink! think pink and you're Michelangelo
Everything on the great horizon
Everything that you can think
(and that includes the kitchen sink)
THINK PINK!

I'd like to close by share some insight from Hue readers from around the globe, commenting on gender specific colors:

"I have been jarred many times by what strikes me as a much more hyped-up pressure in the States to conform to these roles. For example, I have been almost shocked by the extent to which some U.S. online fabric stores actually tell customers in their product write-ups which colours and prints are appropriate for little boys, and which for little girls. Taking into account my 50 years of experience as an urban and rural Canadian being ongoingly exposed to both Canadian and U.S. media and now, to online stores, I have found some of this sort of gender-role advocacy coming from the States to be so over-the-top that it's actually made me consider not buying fabric from a couple of shops." -Oracle

"The association of colour to gender is not so strong in Malaysia. Of course the "pink for girls" trend has arrived but people are not satisfied with "blue for boys"- Sask

"No such stereotypes in India - if it is colorful, it belongs in baby clothes!"-Anon

"Having traveled all over the world I agree that there is a greater gender color bias in the US than most places. Really though it very much depends on geography even within the US. I find that southern and mid-western areas tend to cling to more to the gender/gender link than in the north and northwest areas. In the northeast, where I live, you are just as likely to see a girl in muck boots and overalls as a boy. It definitely is more rare to see a boy in "girl" colors however." -Anon

"I am a woman from Bangladesh and babies wear all colors in Bangladesh regardless of their sex. I learnt about this blue-pink differentiation only after coming to the US."-Kanta

"I'm from Rio de Janeiro, Brazil. In the last decades our culture was heavily influenced by marketing coming from the U.S., so the blue/pink gender association is present in full force." -Pedro

"Hi, I'm from Sweden, where the debate rages high every day...Well, I'm fully aware that there are differences [between the sexes], but to be honest, don't we all wish for our children to be strong, nurturing, taking care of their family and friends, easy going, fun to be with and so on... I think that all qualities that are good in human beings are universal. That is, they are good regardless of the persons gender... " -Michis

"I am distressed by the strict gendered duality of our societies, the rigid pink and blue boxes we feel people must fit in. Far from becoming more equal, we are in fact polarizing work suitability, ability assessments, etc. based on gender."-Simon

"The Pink/ Blue situation is very entrenched here in South Africa but seems to be under going a change due to the '95 elections and a coulor mix here." -Graham

"We have a friend from Pakistan. He said when he first moved here as a child, he was made fun of for picking the pink cap instead of the blue one in school. He said pink wasn't taboo for boys in Pakistan"-Anon

This important conversation needs to be continued. What do you think of gender-specific colors? What are your observations about color where you live? I'd love for readers, especially those outside the US, to weigh in. We need a broader perspective on color that you can offer!
Newer Post Older Post Home