Rene Magritte : Art evokes the mystery without which the world would not exist.

Rene Magritte : The Pleasure Principle, Liverpool Tate.
Rene Magritte was a Belgium surrealist painter involved with the fauvist movement, he was most renowned for his imagery that mixes banal objects in a bizarre way to create an immediate impact on the viewer, which is mysterious and takes time to investigate and explore further.

He did this by his innovative use of layering different textures, surface pattern, veiling imagery, repetition, and using paradoxical realities as seen in 'Day and Night' showing a juxtaposition of night and day.
The exhibition at the Liverpool Tate was set in eight rooms leading on from one another, it acted as a visual representative of Magritte's artistic timeline. All the rooms were minimal in design with the paintings hung side by side as in an drawing room, only one or two of the paintings had rope around them to section them off. The curator Christoph Gruenberg focused the viewers attention to certain pieces by placing an individual bench in front of  a painting, this suggested that it needs examining further or in some way is seen as more special and intriguing.
As you enter each room there is a written full description of the purpose of the room and the contents its contains. The description coupled alongside texts by certain images acts as a role of the museum guide in informing the visitor about the structure and history of the exhibition pieces. In the third room it acts as a resting point, so you can gather your thoughts, as there is a television showing a documentary on Magritte, there is no accompanying sound but it allows the visitor to contextualise the art work by studying Magritte and what he looked like.
A few of my favourite pieces from the exhibition -
The Lovers, 1928. 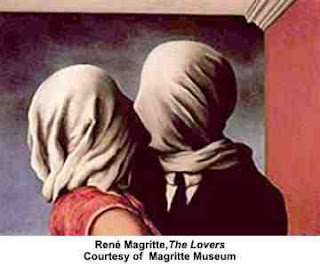 It represents unfathomable isolation by the faces being covered by a dirty looking rag, despite their intimate embrace. This acts as a reflection on the modern day couple as it insinuates that no matter how close one seems to be with a partner, there is something that self consciously restricts full commitment and holds you back, which is seen by the covering of the face.
The birth of the Idol, 1926. 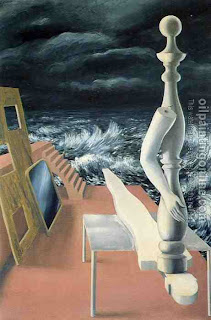 It is representative of an materialistic society, by being named the birth of the idol it makes reference to the settings of 1920s when painted and when celebrity culture was becoming well known, such as flappers and designer Coco Chanel. The crashing waves and diving board in the shape of a person reflect a disjointed society,  the symbolism of the diving board and  instead not a person jumping off, acts as a metaphor that shows people's loss of curiosity by not looking over the edge, and instead being interested in others peoples endeavours, again reference to being named 'The birth if the Idol.' 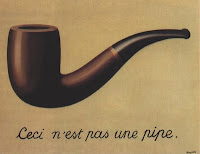 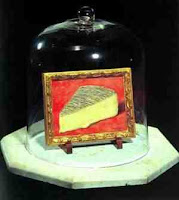 Magritte was also interested in examining the relationship between object, representation and meaning, as seen in 'This is a piece of cheese,' and 'La Pipe.' He was most well known for challenging how an object has specific meanings and how these meanings can be changed, as every object has more than one meaning to whoever is interpreting the image. 'An object is never so closely attached to its name that another cannot be found which suits it better.' Magritte.
It is Magritte's involvement with Paul Nouge the leader of the Belgium Surrealist group, that has improved the awareness of the Dada movement and in turn inspired a range of artists such as Andy Warhol. He worked to make a mockery of what museum institutes consider as art, he did this by his use of bold, brash colours in the exhibition Galerie Goemans in Paris which resulted in his estrangement from the Parisian Surrealists.
Magritte was considered a modern artist by his innovative use of layering, and causing people to examine the meaning people give to objects and its banality in the sense as nothing is fixed, as one persons views are different compared to another, so in essence interpretation varies so no which one is set in stone.
'My painting is visible images which conceal nothing, they evoke mystery and, indeed, when one sees one of my pictures, one asks oneself .. 'What does that mean?' It does not mean anything, because mystery means nothing either, it is unknowable.' Magritte.
Newer Post Older Post Home