The Tassen Museum, Hendrikje museum of bags and purses is set in an opulent seventeenth century house on the Amsterdam canal system, it is home to 4000 bags dating from the late Middle ages until contemporary today.

The canal house works as an majestic setting with period feature rooms and painted ceilings dating from seventeenth to eighteenth century, it heightens the romanticism of the bags and helps to envisage a previous life of the bag and its past grand owners.

The layout was simple with use of soft lighting and handbag shaped encloves in the wall containing bags, had an enchanting approach. All the bags and purses were in glass cases with small labelling stating the designer, date and previous owner of the bag.The labelling was concise, informative and helped to contextualise the bag with its previous life which I feel added to the aura and speculative experience of the visitor.


The bags were arranged in chronological date order starting with sixteenth century bags of lace and ones that once belonged to the Freemasons. One of my favourite bags showcased from the sixteenth century was made from goat, with a leather pouch and iron frame. It is a bag designed for function with eighteen pockets enclosed, it evokes a time of hardship which is seen in the bag itself I feel as it looks like a disgruntled, crumbled face. 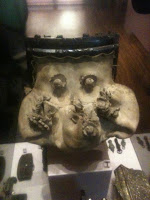 As you follow the exhibition you can follow the fashion changes and styles of bags and purses over the time period, as the last quarter of seventieth century the bags become more decorative with silver frames and use of bright colours. The eighteenth century saw more varied use of animal skins for bags and purses such as tortoise shell, toad, ostrich, horse, zebra, lizard which still had its head and body attached fully on the bag in a petrified manner. My favourite animal bag is made from an armadillo, I like how structured the bag is, the contrast of colour and its bizarre quality. 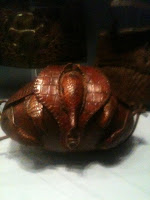 Designer bags from Chanel, Louis Vuitton, Hermes, Vivienne Westwood were shown in the contemporary designer section. Alongside well recognisable bags from the Sex and the City movies, the Lulu Guiness fish bag and the Judith Leiber cup cake bag. 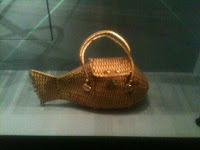 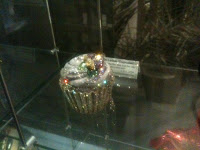 Overall I really enjoyed the Tassen Museum I liked how the layout, structure and display techniques all work in unison to complement the bags and purses. It doesn't feel like a structured museum environment but one of which to appreciate the bags and purses for their beauty and more concerned with visitors speculative experience rather than a doctrine environment. ﻿
Newer Post Older Post Home