The history of publicizing fashion trends.

Fashion is about speed and accessibility, the documentation of the latest fashion is paramount as will only become a trend when the information is available to mass public and they can disseminate and encapsulate the fashion therefore making it the latest fashionable trend.

The reporting on fashion can be traced back to 1770 when the first printed fashion plate was published in ‘The Lady’s’ magazine. The illustrations alongside printed descriptions of the fashion drawings helped accelerate trend to change seasonally, as the new trend was promoted people could copy the style, it was starting the growth in importance of material culture as more people wanted to wear the latest fashionable trend.

Example of fashion plate from 1880 published in ‘The Lady’s’ magazine titled ‘Paris Dress’- France was seen as dictators of fashionable wear, the puffed shoulders, tight waist and pronounced décolleté were latest trend. As well as the lifestyle indicated to in the fashion plate of elegance and upper class style people inspired towards which is symbolised by playing of the harp. ﻿﻿﻿﻿﻿﻿ 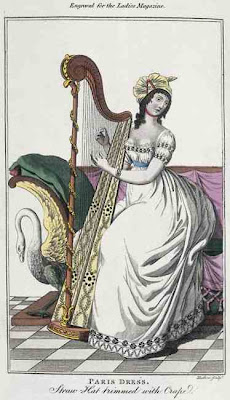 The development of photography and fashion photography towards the end of first decade of twentieth century accelerated the access and information about fashion available to mass public, now there was an exact representation of the latest trend available for people to look upon instead of a drawing. Fashion trends were being showed in Vogue as early as 1914 by photographer Baron de Meyer he used backlighting and soft focus lens to capture the fleeting atmosphere and style of the clothing as shown on the models.
Example of Baron de Meyer in Vogue 1919 – The latest trend was of barrel line which was long tubular skirt with boyish bust of square line, was of time when Poiret inspired orientalism was seen in fashion.  In the image you can see how soft focus was used to create atmosphere of refined elegance. 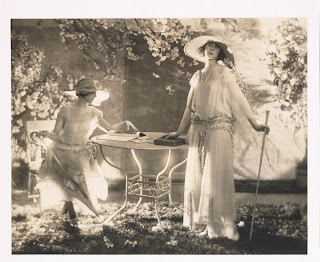 Fashion photography took a backseat during the war years and after the Second World War France’s fashion industry was recovering after four years of Nazi occupation in which no documentation of fashion was circled out of France and with rationing still in place in Britain fashion was not seen in its opulence that was renowned for before the war.
To help rebuild Paris fashion industry and show French latest fashion a touring exhibition named ‘Theatre de la Mode’ started in 1945 till 1946 in which visited London, Barcelona, Stockholm, Copenhagen and America. It consisted of precise miniature mannequins of copies of Spring/Summer collections of 1945, the mannequins were dressed in couture clothing designed by renowned designers such as Schiaparelli, Balenciaga, Molyneux and Balmain as well as milliners, shoe and purse designers. The exhibition raised the portfolio and audience of the French designers and was a resourceful way to show the latest fashions without use of excess material which at the time was in short supply and would have been seen overly opulent as public was still recovering from war torn years.
﻿

Balmain
﻿
Nowadays fashion is documented and spread so fast by the accessibility of live streaming from fashion shows, in 1976 ‘Video fashion news’ was created which was the first video version of fashion magazine in which front row seat access, backstage gossip all enabled the latest reporting of fashion trends to the mass public. Now fashion is consumed by public in such a high speed way that we don’t have to wait for the seasonal trends to be featured in magazines we have access immediately and designers are recognising this with their increase of their own online presence being seen.
Fashion is still about reporting the latest trend but now we the public can do the reporting.
﻿
Newer Post Older Post Home