While in Santa Fe, we went to the Museum of International Folk Art, which was amazing. We saw an exhibit of Indonesian shadow puppets called Wayang Kulit. 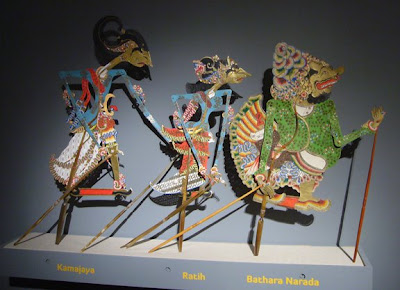 The puppets (wayang) are flat leather creations elaborately decorated and perforated, casting the coolest shadows on canvas behind which the puppeteer sits. These performances are accompanied by an orchestra of drums and other Indonesian instruments, and lasts for about 9 straight hours, from dusk to dawn. People come and go, generally only staying for part of the show, whereas the puppeteer must perform the entire production from start to finish. Now that's stamina!

image source
Audience members can casually move back and forth between the front and back of the screen to see shadows or the actual puppets.

Used as a method of communication and social commentary, these shows pay homage to important ceremonies like weddings, elections, or holidays. 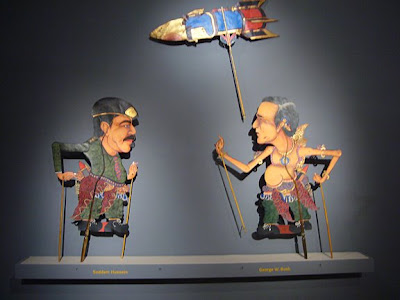 Performances are usually based on classical Indian literature and incorporates contemporary issues into particular scenes. While not traditional, I thought this interpreted storyline was great. Yup, that's Saddam Hussein and George Bush. 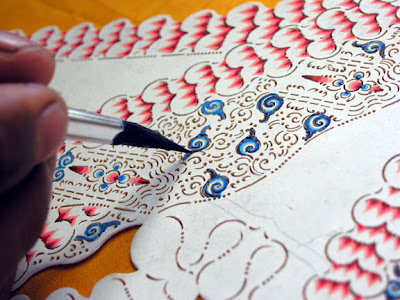 image source
They are insanely intricate.

What fascinated me was the traditional used for creating specific characters of wayang. Each represents a particular identity, essence, and social status.

Some characters have round, wide eyes with big pupils, and others have thin slanted, downcast eyes. Turns out, the round eyed characters (called kasar) are "uncouth and poorly-mannered", whereas the thin eyed characters (halus) are "refined and gracious".

Faces can also be painted pink, blue or green.

So, why don't the characters look anything like humans? According to one source, Islam forbids the depiction of the human form which is one of the reasons given for the highly stylized appearance of Javanese puppets compared to their counterparts elsewhere in South East Asia.

I find it fascinating to learn about symbolism in other countries and cultures. Doesn't it make life that much more rich and interesting?