A colorful history of the wedding dress

Welcome back, Hollie! You might remember Hollie as a guest blogger for Hue. She always has something fun up her sleeve. Here's a little more about her:

Hollie Jackson is a LEED Accredited Professional and an associate member of the IACC-NA. She has been involved in color and material selection for interior and exterior commercial projects for the past 8 years. Hollie lives in Sacramento, California and hopes that all her research on wedding dresses becomes relevant in her personal life very soon.

A colorful history of the wedding dress
by Hollie Jackson 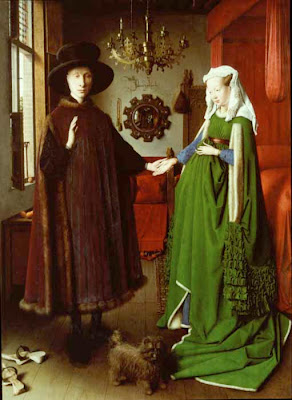 image source
Jan van Eyck’s Arnolfini Wedding Portrait has always been one of my favorite works of art. I love all the detail in the painting and how I discover something new every time I spend some time looking at it. I came across it while browsing the internet recently and had a thought: this is a wedding portrait, but she’s not wearing a white gown. It got me curious about the tradition of the white dress. I know that other cultures have different ideas about what colors brides wear, and I’ve read about the histories behind those, but I’ve never given the white dress thing a second thought. Just took it as something that is, was and always will be.

I did some digging and learned that Mrs. Arnolfini’s gown (painted in 1434) was green to symbolize the couple’s hope for fertility in their marriage (which is funny since she already looks totally pregnant. I guess that green gown did the trick!) Before white became the standard, most brides opted for color. Wedding gowns were meant to be incorporated into the bride’s wardrobe after the big day, so practical colors and fabrics were chosen. 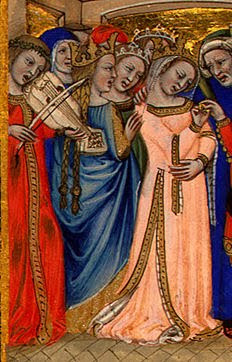 image source
For the wealthy, the wedding ceremony was a time to show off the bride’s value and that of her dowry, so rich, opulent colors produced by expensive dyes were used. Blue, not white, was thought to represent purity, as well as fidelity and eternal love, making it a popular choice. 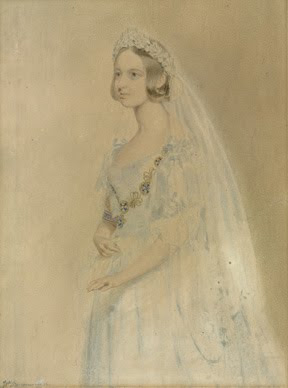 image source
The tradition of the white dress is said by many to have started with Queen Victoria. She chose white for her gown so that she could incorporate of piece of lace that she had into the design. Her wedding portrait was widely publicized and brides-to-be all over the world jumped on the white dress bandwagon. Who wouldn’t want to look like a queen on her wedding day? Since then, the queen’s color choice has come to represent purity and chastity, which seems appropriate since in Victoria’s day, even tables kept their legs covered to avoid appearing unseemly. 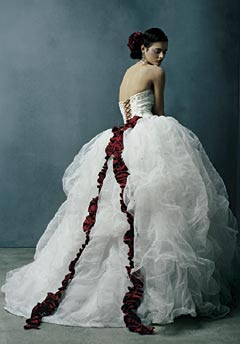 image source
Today, the white wedding gown (or its sisters in ecru and ivory) is still pretty much the norm here in the West. A few designers, however, are taking some chances with color. In some instances, the dress is still white with a pop of color found in a sash or other detail. 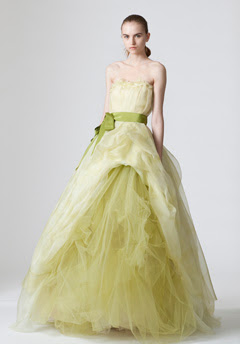 image source
And for the bride who wants something completely unique, there are options that forgo the white altogether. Check out this citrusy green number by Vera Wang. This dress apparently caused quite a stir at New York Fashion Week. Although Wang and other designers have had offerings outside of the white range for the past few years, most colored gowns tend to stay within the muted tones and still have a very traditional effect. 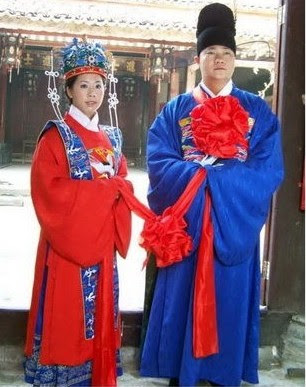 image source
Wedding attire in Eastern cultures is much more colorful. In this photo, showing traditional Chinese wedding clothes, or hanfu, the bride wears red, a symbol of good luck in her culture. Modern Chinese brides commonly have two or more wedding ensembles that they change into over the course of the day to mark different parts of the ceremony; one of these almost always includes a red gown. 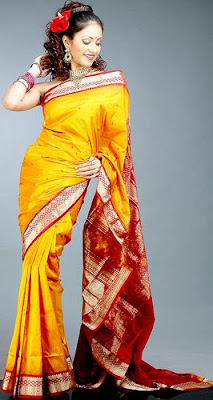 image source
In India, the traditional wedding sari is also typically red, but modern Indian brides have many other colorful choices available to them like the one shown here in a beautiful gold and red combination. The most elaborate of these saris is made from the finest silk and richly-embroidered with thread made from real gold! 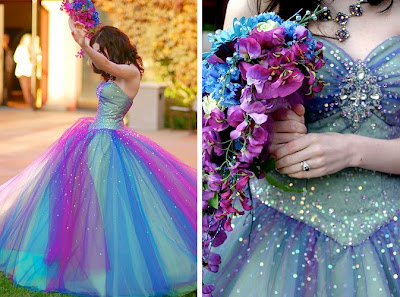 image source
The great thing about the modern wedding here in the West is that anything goes. Although the white wedding dress is still the only option for some, for brides with more colorful personalities, there are many, many great alternatives out there. 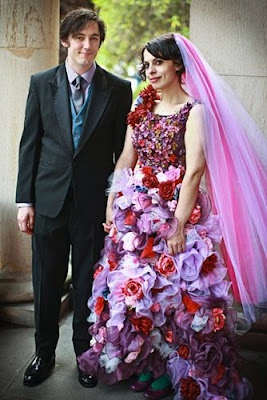 image source
And as our society becomes more and more globally-minded, I’m sure that the rich colors found in the East will regain popularity with Westerners and maybe eventually knock that tired white dress off of her pedestal.

Any engaged folks out there considering a non-traditional outfit for your special day? What about you all who have already tied the knot? Did you knock everyone's socks off in something unexpectedly colorful? Please share!
Newer Post Older Post Home