An Exclusive Peek into the Secrets of Jellyfish

The Monterey Bay Aquarium has an amazing exhibit on jellyfish in their permanent exhibit space. The colors of these creatures against the bright blue tanks is Incredible if you have the chance to see it in person. 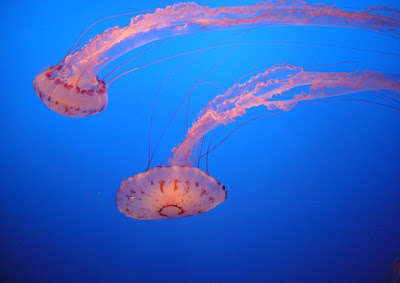 More than anything, I am blown away by the exhibit design itself. Here we have basically translucent creatures- so how do you display that?

I had the opportunity to speak with the exhibits coordinator who was in charge of this tremendous endeavor, Randy Hamilton. "New Wing Exhibits Coordinator" was his title during this project, a hybrid position between husbandry of animals and husbandry of exhibits.

In order to really appreciate the magnitude of this display, you need a little background crash course on jellyfish exhibits. Let's go! 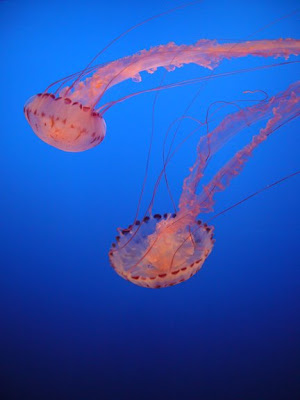 Vision
The original look and feel of the displays was intended to simulate what a scuba diver would see 60 meters off the coast, 60 feet under the water. This feeling of "open blue" would have no sides, no bottom, and no rock pinnacles. Just suspended animation in a vast field of blue. Selected from a ring of acrylic sample colors, there were 3 to 4 blues to chose from. The blue that most closely emulated the color of the ocean at the desired depth was specified.

To achieve this illusion of nothingness, the tanks are much larger than they appear, disappearing out of the peripherals. The tank may be 20 feet, but the opening to viewers is only 16 feet. But how about this: the back of the tank is actually less than 12 inches away from viewers! 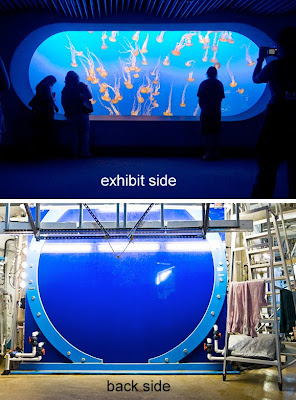 image source
Tanks
When the Monterey Bay Aquarium first undertook the challenge of a jellyfish exhibit, there were huge limitations on the size tank they could design. But the desired blue acrylic panels were only available in 6'x6' transparent sheets. For smaller tanks, this would be fine, as the designers simply glued white opaque acrylic behind the sheets to create an opaque look. And in other large tanks, panels could be butt-welded end-to-end to create enormous windows. But for the jellyfish exhibit, the designers could have no visible seams- it had to be optically-exact. They had to up the ante. After several years of R&D, Nippura of Japan came up with a new patent to accomplish the desired size acrylic panels. 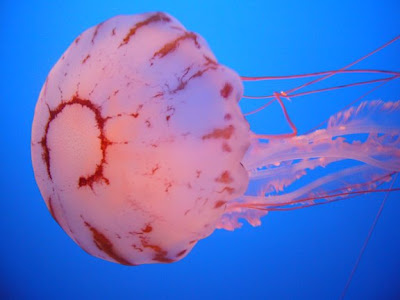 Motion
20 years ago, there were no jellies in tanks anywhere. Jellyfish are 99% water, so in order to keep the tanks filtered, and the animals fed (they eat tiny particles of food all day long that can cloud the water), scientists had to come up with a solution that wouldn't destroy these delicate creatures as clean water was pumped in and dirty water sucked out through filters. The first solution to this dilemma was developed in Germany. The Kreisel tank design utilized laminar flow, the concept of circular flow to support and suspend the jellies. Water flows across the filter to blow the jellies away from the screens to keep them from getting sucked in. This is critical for suspended animation, as well as for keeping the water looking clear for viewing. Murky water isn't pretty. 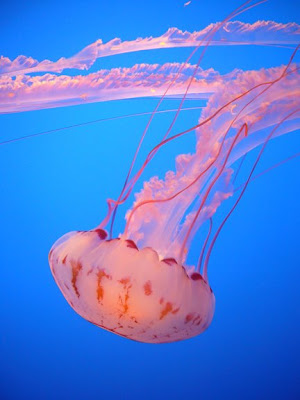 Lighting
Fluorescent lights are used to light the tanks, positioned up high to emulate sunlight from the top of the water. Additionally, tanks are back-lit with fluorescents to highlight the blue tint of the tank background. Side lighting is used to light the animals themselves. The light illuminates the natural color of the jellies; no colored gells are used. 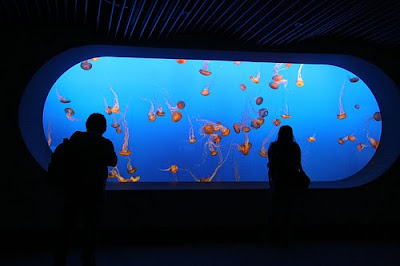 image source
Display
In order to continue the vision of the limitless ocean, all displays were rounded with organic shapes. An architectural feat, and an engineering nightmare, according to Hamilton. While viewers won't necessarily -see- the curving dark walls of the exhibit, (helping the tanks take center stage) the subtleties of the exhibit are of course experienced by all.

An amazing exhibit, my many thanks to Randy Hamilton for taking the time to explain this to me so I could share it with you!