Putting colors on a dinosaur

This has been pretty widely covered on the blogosphere, so I won't repeat what's already out there. Just wanted to give you the heads-up that there has been some phenomenal discoveries about the color of dinosaurs. 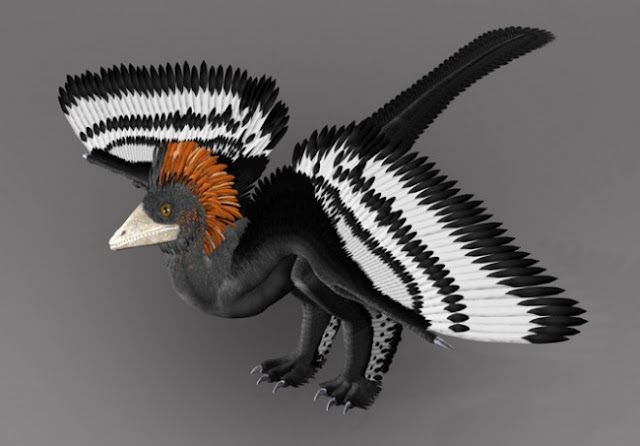 image source
Anchiornis huxleyi
Feathers or bristles contain pigment-loaded sacs called melanosomes. Scientists have demonstrated that melanosomes survived for millions of years in fossil bird feathers. The shape and arrangement of melanosomes help produce the color of feathers, so the scientists were able to get clues about the color of fossil feathers from their melanosomes alone.(source)

"Some features, like the crest, might have allowed the dinosaur to attract mates. But white and black limb feathers might have helped Anchiornis escape predators. A number of living animals like zebras use similar color patterns to dazzle predators, so that they can run away."(source)