Color clawing its way to importance

Reading an article the other day about adding color to Korean schools, I was bolstered that the psychological effects of color are impacting people at the level of education. It's about time! 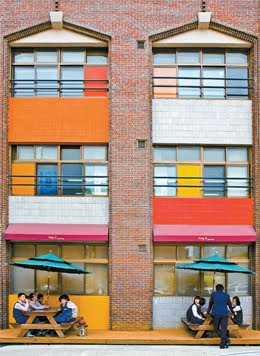 Then, I read this statement,"In each case, the superficial changes implemented at the schools have had a positive effect on student behavior, creating more considerate students while also decreasing vandalism."(source)

Of course, they could simply mean that it was an easy change to make- slapping a coat of paint on the walls is much easier than say, adding a skylight, or a new classroom wing. Color has a huge impact, and while it seems that something so simple couldn't possibly make that much of a difference, the facts are irrefutable. The principal at one of these improved school buildings says, "with the positive change in the school’s environment, I now see that students have also changed for the better.” (ie. no more carving or scribbling on desks)

My question is, how do we convince public agencies that funding for educational facility improvements should be high on the list of priorities? (well, after first bumping up spending for education as a whole, of course...)
Newer Post Older Post Home