Fantastically-silly interview on the Colbert Report with painting superstar Chuck Close.
Imagine having the opportunity to interview someone of that level of fame?  Colbert is rather dorky trying to converse with this amazingly talented artist, but you still manage to learn some interesting tid bits about the man. 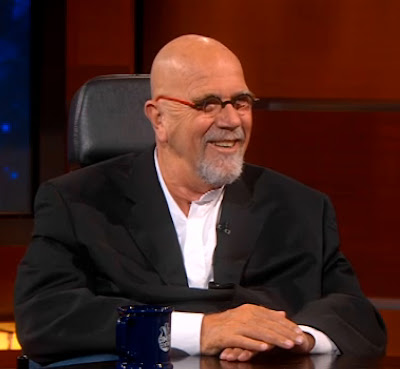 When Chuck was painting in the 60's and 70's, portraiture was out. Especially representational painting. 'Cool' was splashes of paint, or messy screen prints. So he didn't have much competition with his large-scale, photo-realist portraits. When asked why he painted so huge, he jokes that he used to say, "the bigger they are, the longer they take to walk by, and therefore the harder they are to ignore."(source) I love that.

I wanted to find out more about the artist, so I did a little more research online to fill in the gaps. 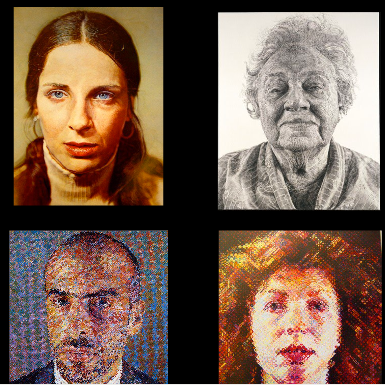 image source
By working from photographs, he 'purges' himself of perceived crutches, he's been quoted as saying. "The first thing I did was I wanted to purge my work of everything I had done as a graduate student. I threw away all the materials I had, all the brushes. I was told I had a good sense of color which meant I’d learned that certain color combinations looked more like “art” than other color combinations." (source)

Interesting take, right? As though he was aware of falling into habits by using color recipes. Hm, kinda like what I tend to preach here: color design as subject/site/use specific, and refusing cookie cutter color formulas. 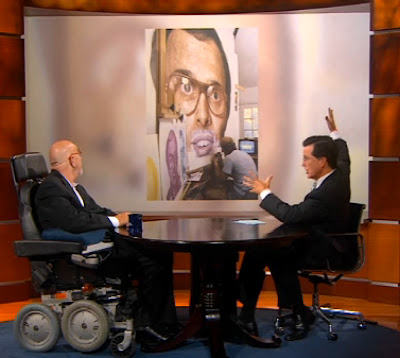 While Close's technique for paint application has evolved over the years, the perceptual mixing of value and color has not changed. One variation on this theme was his 3 color process paintings made from 3, 1 color paintings using only cyan, magenta, and yellow layered ontop of each other. (pre-computer generation, mind you!) Chuck explains, " It is just a relative proportion, more red than blue, more blue than yellow that determines the generic color and then the relative density."(source)

Always challenging himself, he continues, "See, just the red nose, you add the blue and you have the purple nose, add the yellow and you get full color. So I learned an awful lot about color by mixing it on the canvas, and I was able to make pictures again without using the pallet, where everything was mixed in context, in relation to pieces that had already been completed and in anticipation of things I'm going to do next." (source) 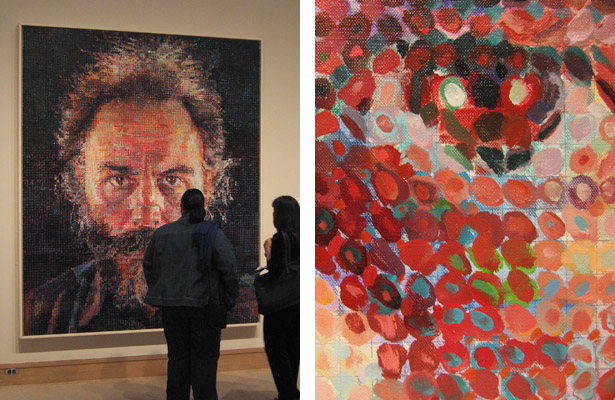 image source
His donut paintings (my expression) are the coolest. Hundreds of "cells" filled with colored elliptical and ovoid shapes comprise the painting. Like a pointillist painting with blobs of color placed next to one another so that when you stand back far enough, colors mix, and images form. 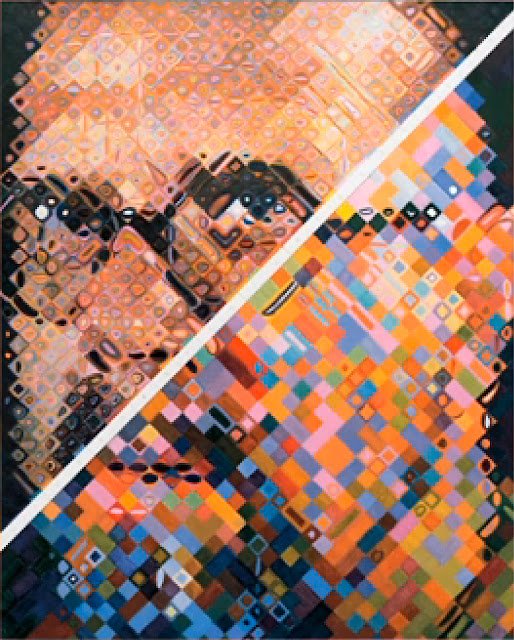 image source
Here's an example revealing Close's process. From the tape down reveals the "first pass" at a self-portrait, using "rather arbitrarily picked colors so that [he will] have to do something different ontop of it [the initial color choices]."

The color-challenge this presents him is fascinating. Here, he describes in more detail:

I have to move the colors from what's on there to what I want, which is, you know, a series of 4, 5 or 6 corrections - correcting moves. It's sort of the color equivalent of a musical chord. If you think about the way a composer would go in a room and score, let's say, the oboe's gonna play this note, the bassoon's gonna play that note, the french horn will play that note, the resultant sound, the combination of those notes makes kind of a chord, and I'm doing the same thing with color. The 4, 5, or 6 colors when seen together will make kind of a color chord, in a sense... 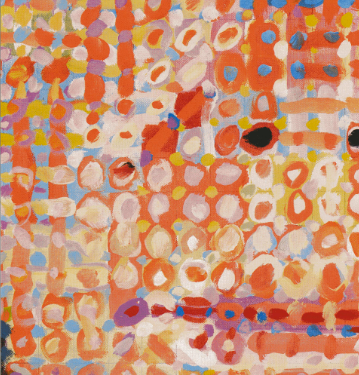 image source
"Besides being a face, it's colored dirt on a flat surface," Close demur's.