Another View of the Religion of Madonna

Throughout the career of Madonna, she has made use of her image to pinprick certain aspects of popular culture. With her strict Catholic upbringing, it comes as no surprise that religion would be one of the targets after turning her sights on stage. During her "Like a Virgin" performance during the first Video Music Awards on MTV, this trend continued as the singer performed in a wedding dress before rolling around on the floor. The white dress is to be donned, specifically in the Catholic Church in which Madonna grew up, by the "pure" on their wedding day. But as the article "Virgin Territory" points out, Madonna turns the symbol of innocence into "a sleazy go-go outfit," spinning the symbolism of it. No longer is white pure, a thing for those who have done right, but it has turned into something that any 'sinner' can wear and pushed the ideas of what innocence can be. 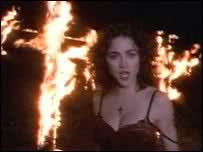 This is not the only place that the singer does this however. "Like a Virgin" was just the beginning of her attack against strict rules of purity that the church of her youth tried to enforce.  A few years after her performance, in Madonna's "Like a Prayer" music video, she once again sets herself in a place where the church finds sacred symbols. This time, instead of a sacrament, Madonna takes on the church itself. The USA Today, quoted by the Washington Post, went so far as to say that the production was the "Satanic Verses of music video," making the singer stand out once more for her twisting of signs that the church stands strongly beside. As with "Like a Virgin," Madonna is willing to throw out the old and crash in with the new, providing an alternate way to look at these symbols in a world that was changing just as fast as her songs' tempo.
Discussion questions
- Was Madonna throwing more light on how a wedding dress implies purity or how marriage is no longer a strict sacrament?
- Why would Madonna go so far in the "Like a Prayer" video to liken herself to Christ (by imitating the wounds of his hands from the cross)? Is she saying she is Christ like or something else?
- Madonna pushed boundaries. Were these two performances/songs there to push the boundaries of religion away from her changing culture or to make internal changes to the church by showing it to itself?
- It was fairly difficult to find many sources on Madonna's impact on religion in her early years, yet there were many articles on her recent activity. Does the Madonna of today overshadow her beginnings?
Sources
1. "Virgin territory: How Madonna straddles innocence and decadence" - Joel D Schwartz, The New Republic (pre-1986); Aug 26, 1985; 193, 009; ProQuest Central
2. "On the Beat: Madonna's Clashing Symbols" - Richard Harrington, The Washington Post, March 15, 1989
Newer Post Older Post Home