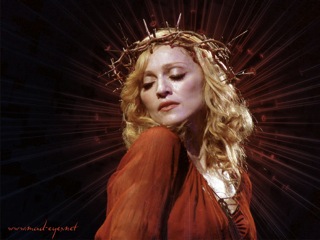 Madonna has throughout her career pushed the limits in her craft as an artist. Some could say it was Madonna simply channeling her artistic inner-self, while others could say that she is simply being controversial to market herself. I believe that the two coincide with one another. What made Madonna such a pop icon is that she consistently reinvented herself and didn't see any topic as being off limits. Religion being one of her many targets in her songs. 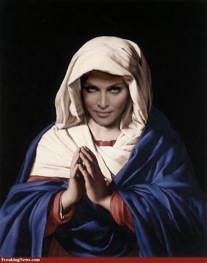 As Madonna explains, "It just fit right with my Zeitgeist (spirit of the time) of standing up to male authorities, whether it's the pope or the Catholic Church or my father and his conservative, patriarchal ways." For example, songs such as "Like a Virgin" and "Papa Don't Preach" brought Madonna both praise from religious groups as well as extreme criticism. As Todd C. Ream points out in The Gods of the Checkout Aisle, Madonna's wildly popular video "Like a Virgin" relocates the rosary and crucifix in a hyper-sexualized context. Instead of fostering communion with God, these images encourage brazen promiscuity. 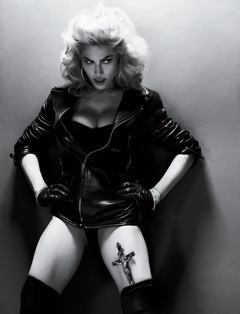 But my argument is, was Madonna telling young girls to go out and have sex freely? I find that hard to believe.
Madonna lived to create controversy and she proved it to the world in 1984 when she showed up in a wedding dress at the first MTV video music awards and preformed "Like a Virgin" writhing around on the floor in front of millions of viewers. Her dance performance wasn't even planned, in fact her manager at the time Freddy DeMann thought her career was over after it. As Madonna told Rolling Stone Magazine, "I was rolling around on the floor, my dress up, and you could see my underpants. What was I thinking? I dropped my shoe, I don't know how to get it back on, and I am going down on the ground. It was a lot of things. It was scary and fun, and I didn't know what it meant for my future". Little did Madonna realize, but that performance would launch her career, as well as cast her in the spotlight in both a sexual icon or a slut defacing the purity of a "white" wedding dress and all that it represents.The Catholic Church was outraged by the belittling of the sacred vow of marriage.
Madonna went on to anger Planned Parenthood and again spark comment from the Catholic Church with her song "Papa Don't Preach." The line "I've made up my mind, I'm keeping my baby," caused anti-abortion groups and the Catholic Church to praise Madonna and abortion rights groups to criticized her. In the New York Times the director of Planned Parenthood of New York, Alfred Moran stated, "The message is that getting pregnant is cool and having a baby is the right thing and a good thing and don't listen to your parents, school, anybody who tells you otherwise -don't preach to me, Papa.The reality is that what Madonna is suggesting to teen-agers is a path to permanent poverty." However groups like the Catholic Church who opposed abortion saw "Papa Don't Preach" as a positive, "pro-life" song. When questioned about where Madonna stood on the issue of abortion her spokeswoman Liz Rosenberg said, "She's singing a song, not taking a stand." Further stating, "Her philosophy is people can think what they want to think."
The last statement by Rosenberg summed up how Madonna made her career. She sang songs that could be interpreted in many ways. While a song could infuriate a group such as the Catholic Church at one point in time, that same group would embrace Madonna at another time. She allowed the listener and viewer to make their own decisions of what a song meant as well as their own decisions of how to live their lives. Just as Madonna has done  throughout her extensive career.
Questions:
Do you think Madonna was for or against abortion and why?
Do you believe that Madonna's "Like a Virgin" performance was preplanned or not and why?
Do you believe Madonna had a message to get through to her audience, and what was it?
Sources:
New York Times: Madonna's New Beat Is A Hit, But Song's Message Rankles.http://www.nytimes.com/1986/09/18/nyregion/madonna-s-new-beat-is-a-hit-but-song-s-message-rankles.html?ref=madonna&pagewanted=print
Newsweek;2/12/2007,Vol.149 Issue 7,p40-47 http://search.ebscohost.com/login.aspx?direct=true&db=aph&AN=23895298&site=ehost-live
Rolling Stone magazine: Madonna Looks Back http://search.ebscohost.com/login.aspx?direct=true&db=aph&AN=44760759&site=ehost-live
The Gods of the Checkout Aisle: Christianity Today; Apr2011, Vol. 55 Issue 4, p65-65, 2/3phttp://search.ebscohost.com/login.aspx?direct=true&db=aph&AN=59798847&site=ehost-live
Newer Post Older Post Home