Madonna Uses Sexuality as a Feminist

Madonna is notorious for utilizing and marketing her sexuality to fans, critics, and the general public. Her sexual rolling dance in her "Like a Virgin" performance was only the beginning how far she was willing to go. Soon masturbation on stage, perpetual humping choreography, on stage simulated sex, and violation of inanimate objects were added to her repertoire. Madonna has acted as both the slave driver and the objectified women chained to a bed. Many do not link over the top sexuality with feminism, in fact most view degradation of women as an example of patriarchal values inherent in society. Madonna replied to critics "But I chained myself! I'm in charge." Despite this response one may wonder how being the slave of male desire conveys a feminist attitude?
Using her sexuality Madonna morphed from a young pop princess into a shrewd business women, and turned her image into a multimillion-dollar company. As far as feminists are concerned parading around and acting brazenly does not seem to fit the bill; however, feminism is supposed to shy away from the female cult of domesticity. Madonna used her sexuality to sell herself as a brand, while subsequently rallying and pushing away feminists. It may be argued however, that Madonna's use of sexuality would be the future of feminism; a future with women running the show. Subsequently more women have followed suit over the past few decades, using their openness to sexual human behavior as a catalyst for success, fame, and power. 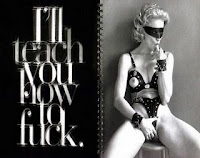 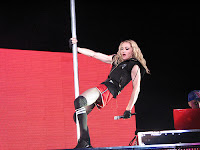