Bri as Madonna for Halloween 2003

Madonna represents many things to different people: originality, controversy, music.  But one thing most everyone can agree upon is the fact that Madonna is a fashion icon.  Particularly during her first years as a celebrity in the 1980's, Madonna pioneered a signature eighties look, one that is recognized and copied even today.  Religious jewelry, rubber bracelets, and headbands are among the trends that Madonna started.  Additionally, her original and risque style opened the door for a perhaps more individualistic and empowering trend in fashion.  Madonna's style not only created a signature eighties look, but it helped pioneer a strong and empowered attitude among women of the 1980's. 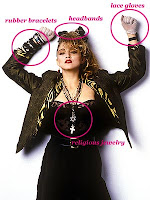 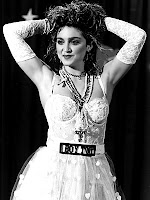 Madonna's white "bride" outfit worn in the 1984 MTV Video Music Awards is one of her most well-known looks (see picture above).  It is also very representative of the style that quickly gained popularity when Madonna was first making a name for herself.  Her performance at the 1984 VMA's is somewhat infamous, as is her outfit.  It is still recognized, even copied today (see picture of me as Madonna for Halloween in 2003).  This kind of look showcased Madonna's sexy and confident style.  Not only was her fashion mimicked, but women of the eighties also embodied her attitude.  As one surveyor wrote (1), "She took the standards to which women could express themselves to a new level.  She said just because you are strong doesn't make you a bitch or a slut, and if people call you that, so what.  Who says it is always a bad thing?  She empowered a new generation of strong little girls."  Her fashion influence implicated a shift in the lives and attitudes of the women of that era; this unique and sexy style gave way to a sense of empowerment.

Such a profound influence on eighties fashion is not something Madonna intended to achieve.  In a 1987 interview with Jane Pauley, Madonna says (2), "...When my first records came out, the clothes that I was wearing at the time were the clothes I'd been wearing for the past two years in New York...All my friends were wearing all the bracelets and all the necklaces and it was very inexpensive also."  It seems clear that Madonna had no intention of sparking such a memorable trend in fashion.  Her impact on fashion is important to note, though, because of the positive influence it had on women.  Madonna (in her own, somewhat controversial, way) made it okay for women in the eighties (and beyond) to be sexy, to take charge of their sexuality and womanhood and to show it off through fashion.
Questions for Discussion:
-Which Madonna look from the eighties is most memorable to you?
-Why was (is) her image so important to her success/popularity?
-What role do you think fashion plays in the Madonna "empire"?
1. "Renee." Survey 2: 80s Influences Survey.  2011.  The '80s Server, a Division of MacroMusic, Inc.
http://www.80s.com/survey2/response80sInfluences.html, March 29 2011.
2. Pauley, Jane. Madonna Interview with Jane Pauley 1987 part 1. 2009.   YouTube.
http://www.youtube.com/watch?v=Q-iYHROTY3c, April 11 2011.
Also referenced:
Unknown author.  The Madonna Look-Strike a Pose.  2011.  Like Totally 80s.  Denning E-Solutions, LLC.  http://www.liketotally80s.com/madonna-look.html, March 29, 2011.
Newer Post Older Post Home