Some of my favourite images from Walker art gallery, Liverpool. 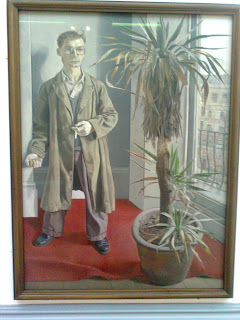 The man in the image is Harry Diamond a well known photographer of the bourgeois London 60’s scene and Freud’s friend. I like that even though he is a close companion he captures him as wearing an ill fitting coat, mood of depression and anxiety by clenched fist and how he is focused on the plant which seems out of proportion to himself as though he is self consumed in his own feelings. I feel there is a comical element to the image of Freud denoting his friend as a moody, self consumed character.
Harold Gilman- ‘Mrs Mounter,’ 1916/17. 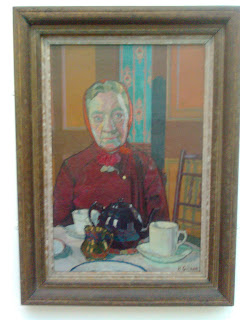 This image is of his landlady Mrs Mounter she is represented as a specific real character and is not glamorised in the process, the use of colour I like as is a balanced composition of her face against background I feel that the colours all blend nicely together to accurately represent Mrs Mounter in her own surroundings. Also the use of thick brush strokes re-immerse that she is a real character and is not highly staged to appear neat and exact but in true likeness to the character.
Paul Cezanne – ‘The murder,’ 1868. 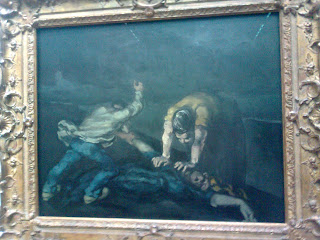 Cezanne was an important figure in abstract art and cubism movement but this is an example of his earlier work I like how it is so different to his later work it is as his use of dark subject matter of anonymous violence as cannot see attackers faces and desolate surroundings is an indicator of his mind process of his confusion of trying to determine his style and his turmoil over the process by his blurred background and thick brush strokes used of bodies which is so different to his later style.
Frederick Sandys – ‘Helen of Troy,’ 1867. 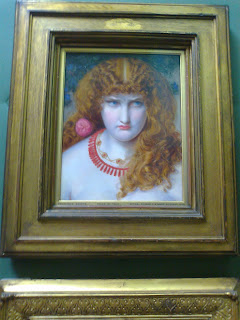 This image I love as is an example of the Pre Raphaelite favoured style of beauty of her rosy cheeks, full lips and pale complexion. I think it is slightly humorous as well by her sullen and guilty expression by her eyes being out of focus it is as she is withholding a secret glimpse at someone, she was described as having fatal beauty which I feel this image represents by the juxtaposition of her sullen expression versus her features it is as the burden of being so beautiful comes at an expense.
Paulus Bor – ‘Mary Magdalene,’ 1630-39. 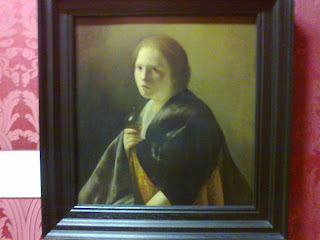 I think this image is dramatic, theatrical and emotional by the use of strong lighting effect above her head to illuminate her face of the repentant sinner. The use of colours and her posture all work by encapsulating on the story behind the image and it made me have an emotional sad response as you feel for her, it is very typical of the dramatic style of Baroque era.
The little artists, John Cake and Daniel Neave, ‘Hirst’s shark tank,’ 1994 and ‘Emin’s bed,’ 1999. 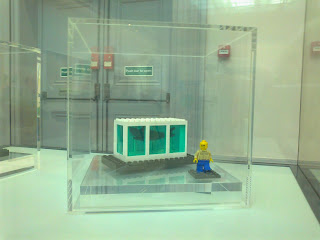 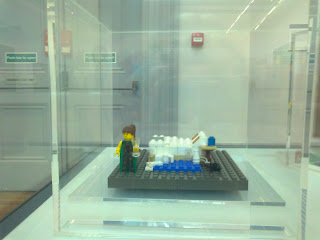 The conceptual artists Lego representations of Hirst’s and Emin’s work I feel is comical and a light-hearted reprimand to the effect of art as a commodity as is a humorous look at the power of the original art work and is showing how art is now a commodity.
Newer Post Older Post Home