Lady Lever Art Gallery current has an exhibition of Eleanor Fortescue-Brickdale work who was known as one of the key figures in the last phase of Pre-Raphaelitism, a generation younger than the original Pre-Raphaelites (1848) she helped to revive their style at the end of nineteenth century.
The Pre-Raphaelite style of heightened colour and hyper real detail was known for in their images of telling a story of mystical religiosity and femme’s fatales, it was of the Victorian era where Shakespeare and medieval quests was a source of inspiration.
The Lady Lever exhibition was a labyrinth design of three rooms showcasing in chronological order Brickdale’s work as painter, designer and illustrator. The walls were painted lilac with the images in gold mounted frames and panel boards in each room with background information on about that time period. Overall I wasn’t enthralled by the design as there was no variety in display techniques used or colour was not emphasised it was not in keeping with the Pre-Raphaelite style of heightened colour and mystical story telling. I think in the exhibition plan there could be more definition used between each room/time period of emphasising the key highlights of that period via use of colour and texture.

The aspect of the exhibition that I was interested in was how Brickdale showed women she celebrated their beauty as a scene of nature and women were not seen as just ethereal creatures to be adorned and adored but who had control of their own destiny by their own natural beauty and how it could be used to disarm and distract men.
The little foot page, 1905. 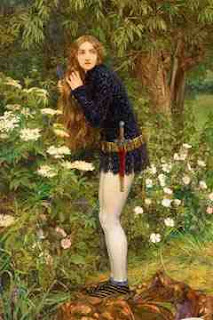 In this image Brickdale showed a woman cutting her own hair to disguise herself as a man so she could follow her lover as he rode on horseback as not to be discovered by him. By her cutting her hair it is symbolic of the lengths women would go to trick their lover as in the Victorian period long waving hair was a sign of aesthetic beauty. The woman is shown to be cunning and scheming in following her lover, it highlights the differences that women are showing as the Victorian period progresses from the previous images of ethereal delicate creatures to now being connoted as devious in controlling their own beauty for their own gains.
Vivien and Merlin, 1911. 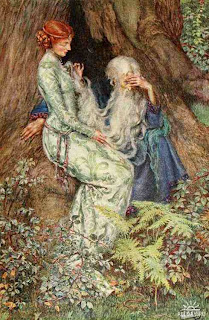 In this image Brickdale shows how Merlin the wizard is beguiled by Viviens beauty, it shows the power of women as a seductresses as she is disarming him in taking control of his magical powers. She is shown as a serpent like figure with emerald green cloak it is the use of animal analogy and the use of natural colours in showing how women could be seen as part of nature and animalistic in their qualities for their own self preservation by the tightness of her dress it has sexual connotations and how use of their feminine charm and dress can be used to disarm and distract, it shows Vivien as a femme fatale.
Recently photographer Ellen Von Unwerth photographed model Eniko Mihalik for July 2012 Vogue Italia in a shoot named ‘So full of dreams’ it is inspired by the Pre-Raphaelites but unlike Brickdale it goes back to the earlier stages of early nineteenth century and shows women as ethereal creatures to be adorned and adored in this case by lightweight dresses and sparkling jewels all by Chanel. It shows how when we think of the Pre-Raphaelites we like to imagine beautiful, delicate women but I like how that as the Pre-Raphaelite period ended at beginning of twentieth century women were now seen as more than having just aesthetic charm. 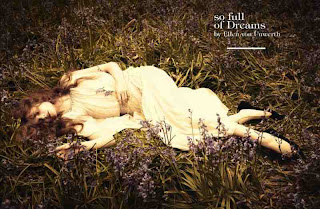 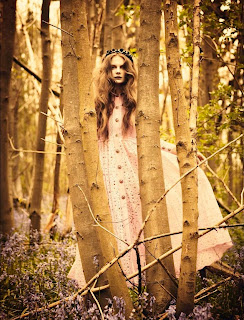 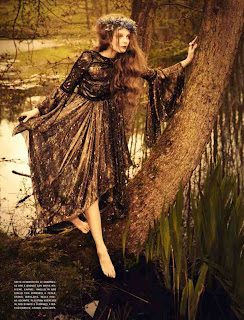