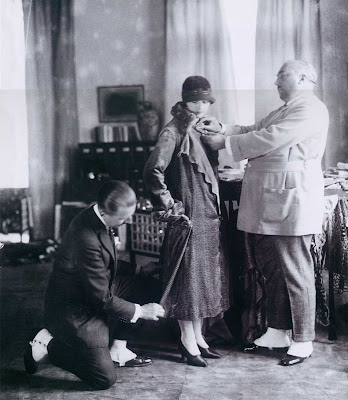 Poiret with his tailor and a model
http://manteigavoadora-designs.blogspot.com/2008/09/paul-poirets-biography.html
Poiret’s rise to fame began with his first design for Jacques Doucet; a red cloak which sold 400 copies, customers demanded the design in other colors.  Poiret himself said that it was a mantle he made for the actress Réjane in a play called Zaza that really secured his place in the fashion world.  He became well known in both Europe, and America, and not only broke into fashion, he started a renaissance.  His career was interrupted during World War I, when he was drafted to serve with the French army.  Despite the war, Poiret was the dominant designer of the decade.
Newer Post Older Post Home